To run it you must have a licensed copy of GAMS.

Thanks to my commentators and pop quiz

Hi folks, it's been a while. While I reserve the right to post as I please, and you the right to avoid reading this, sheer courtesy obliges me to be timely in moderating comments. Actually I would have wanted to turn the moderation option off, except that spammers have a field day. So I have now dealt with the commentary backlog, and thanks for paying attention. And since you are, I have a pop quiz (and perhaps this should be standard interview question for financial analysts): the newspaper today reports that the debt of the Republic of the Philippines stands at Php 3.964 trillion, of which 2.303 trillion is local and the rest is domestic. Averaging over the number of Filipinos, every citizen owes Php43,805.

Estimate the net present value of the average debt burden of each individual today. List all the assumptions and calculations.

The Philippine Government is now tightening the screws on direct hiring of Filipino overseas workers (i.e. not hired through licensed recruitment agencies). Read the details here and in the links referred.

The bureaucracy was slow in catching on - after severe repression of the formal labor market domestically, it realized its ineffectiveness in policing foreign markets. But the consistent boom in remittances introduced the government to a cash cow there for the m(b)ilking.

You'd wonder why the "beneficiaries" of protection are so enraged by these new regulations. Remember the saying? "Never attribute to malice what can be equally due to stupidity." Well in this case I think it's both.
Posted by Roehlano at 7:22 PM 1 comment:

Economists have been dreaming it for years: land reform by Progressive Agricultural Land Tax. The current land reform scheme in the Philippines (whose funding is running out in mid-2008) requires the State to acquire farm land from landowners until their properties are no larger than 5 ha, the legal retention limit. Acquisition requires "just compensation". Experience over the last 20 years of implementation has shown the colossal problems with this scheme. First, land ownership needs to be properly documented to determine whose guilty of breaking the law (on excess landholdings) and ensure legal transfer of property. Second, value of land needs to be set, opening a litigation abyss.

The beauty of the PALT is that it entails the same documentary requirement (done anyway under the second scheme) but avoiding the second set of problems associated with land valuation. Farm lands above the 5 ha retention limit are subject to an additional tax, which can be graduated by size class (say, 5.0 - 24.0, 24.0 - 50.0, above 50.0). The objection by Skinner (1991) that the PALT is administratively impractical is moot.

The tax rate can be made sufficiently punitive as to induce land fragmentation (say, 5, 10, and 20 times the regular real property tax assessment). The PALT is effectively a fine imposed on landowners who violate the law (RA 6657) on maximum farm land holdings.

Administration is simple: one need only to enact a national PALT, which is assessed on top of the local government real property taxes. Collection of the PALT can be done by a separate national government Bureau reporting to the Department of Finance. (Staffing can be done initially with personnel from the Department of Agrarian Reform.) Land sales can be facilitated by the Land Bank of the Philippines, who stands ready to acquire lands (at manageable prices) using money from the Agrarian Reform Fund (which is the current set-up). The land can then be resold to deserving farmers or landless farm workers (who amortize their lands under the usual discipline of formal mortgage contracts).

The PALT can even do away with some documentary requirements. It will not require remediation of land titles where these are defective - it can use the same documentation as the real property tax. Of course safeguards would need to be introduced: the PALT Bureau can institute its independent documentation of landholdings (in cases where local assessors are incompetent, ignorant, or corrupt); it can introduce a tax on idle lands and conversion from agriculture to nonagriculture (to prevent landowners from evading the tax); revenues can be shared between local and national government (the latter earmarked for infrastructure spending to benefit Agrarian Reform Communities); and so on.

What have I gotten wrong? Let me know. Otherwise Congress should pay heed as the debate on extension of the agrarian reform heats up.
Posted by Roehlano at 6:44 PM 2 comments:

JPEPA in the bag

While surfing for JPEPA (Japan-Philippines Economic Partnership Agreement) updates, I came across the blog of Senator Miriam Defensor-Santiago. Entries are almost certainly written by her staff, but presumably with her imprimatur. Would it be premature to say that JPEPA is in the bag?

Opponents continue to trot out tired arguments. These are the same prophets of doom, who predicted economic disaster after trade liberalization started in 1986, after the 1994 WTO agreement, after the AFTA-CEPT, after the APEC, etc. Their record of success: exactly zero.

Listening to them, it would seem that the Philippines would be neck deep in hazardous waste after the JPEPA is ratified. Given their prophetic accuracy, excuse me if I ho-hum.
Posted by Roehlano at 4:56 PM 1 comment:

Labels: Trade and the open economy

What if we could live forever?

The pious believer already believes this. But what if secular science could indefinitely extend this present life? This Economist article talks about a few who think breakthroughs are within sight. Moreover it presents the intriguing concept of the longevity escape velocity - if you could live long enough to benefit from life extension innovations, and these innovations come about more rapidly in the future, then conceivably some people alive today may experience hitherto unknown lifespans (over 150 years).

I wonder what the social and economic implications would be if life expectancy could say achieve early Genesis scale (a millenium). My biggest concern is to contain population growth. At such prolonged lifespans, I think the environmental carrying capacity requires very low annual fertility rates. With very little reproductive selection going on, genetic erosion in homo sapiens may accelerate. This may render us vulnerable to population shocks - pathogens, climate shift, asteroid collision, whatever. (Technological optimists would think that a fix may be possible for this.)

And think about it - a world where children are as rare as, say, 2 m tall people are today. What would the quality of life be in such a world?
Posted by Roehlano at 11:55 AM No comments:

Unlike in politics or even business, it is difficult to identify distinct "events" in an economy and say, "that's important, should be in the list of top ten stories." The economy after all is a system of billions of interacting parts, with each transaction in itself trivial, but adding up to an incomprehensible whole. Hence, for instance, GDP going up is not literally a single "event". But for convenience I'll just point to some top "developments" in the economy and business, which I think will have a widespread and lasting impact on the economic system. Three are external, and the rest internal; some are distinct political events which I think are portents of deep economic change. 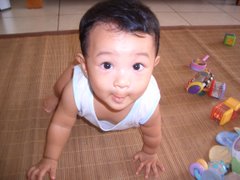